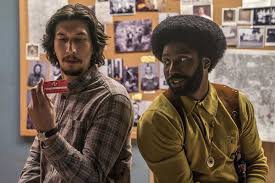 that’s the question I posed to my son.

He chastised me for asking such a question.

Denzel’s got a film out – Equaliser 2.

The story of a fictional good guy

Spike Lee’s got a film out

who infiltrated the KKK.

We know which film we’re going to see.

Even though I knew what was going to happen,

I was still on the edge of my seat the whole time,

finishing sweets and bags of popcorn in double quick time.

Even though it has it comedic moments,

I could still feel the adrenaline of anger running through me.

The scene where ‘White Ron’ is in the basement

will live long in the memory.

Look out for ‘Black Ron’ being assigned as David Duke’s bodyguard.

As usual with a Spike Lee film, there is always a strong message,

which in this film is obvious from the opening credits.

But in case anybody didn’t get it,

the end with real footage from Charlottesville

will leave nobody in any doubt.