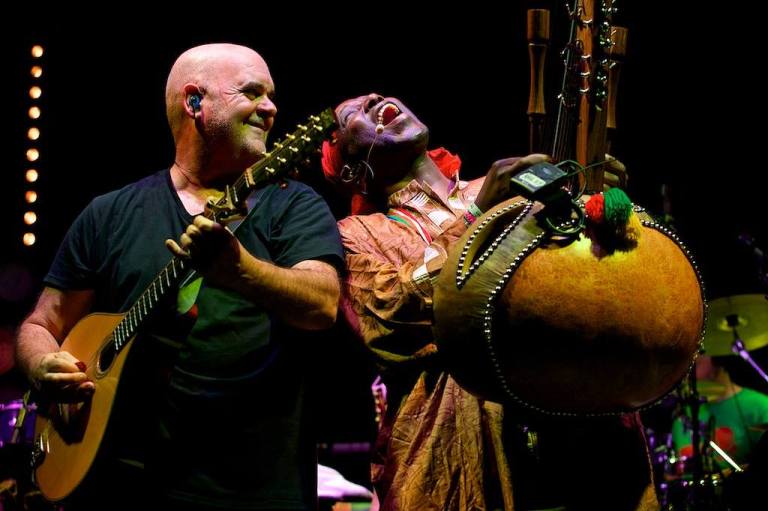 Founding member, Simon Emmerson claims he is an old punk. I do not believe him. Afro Celt Sound system are a tight, slick, professional well-oiled machine with an expensive light show, which looks too grand for the Newcastle Riverside, a venue perfect for creating an intimate atmosphere. Its like a really big living room with a balcony on one side where everybody can get a good view of the stage. They are out on tour to promote their new LP ‘The Source’.

For the uninitiated, The Afro Celt Sound System are exactly what you’d think they are from their name alone: musicians playing a blend of African music, Celtic music and Reggae Dub music. It’s a crazy idea that Simon had 20 years ago and it works wonderfully.

There is a vast array of world instruments on the stage; Kora, Guitar, Violin, Tabla, Talking drums, Keys and drum kit as well as 2 female vocalists.

They kick off with a laid back bluesy number sung by Rioghnach Connolly with the lyric “Keep hold of your children.”

The musicianship is of the highest order. There are plenty of synthetic sounds and heavy bass tones but they do not dominate. Its all about the players and the traditional instrumentation. Then out of the right hand side of the stage a guy with a flat cap pops up and plays a frenetic bagpipe solo. It fits, it’s brilliant. I was thinking that’s a nice little one off gimmick. I was wrong. The bagpipes return frequently and it works every time. The thing you have to understand, is that everybody playing in the band is the real deal. Griogair (a.k.a G-Croft) is not just a bagpipe player, he speaks and raps in Scottish Gallic, he plays guitar and flute. That is the beauty of Afro Celt Sound System, each performer could stand tall doing their own thing and you would pay money to see them but when they perform together it takes the listener somewhere else. You can feel the harmony, you can feel the joy. 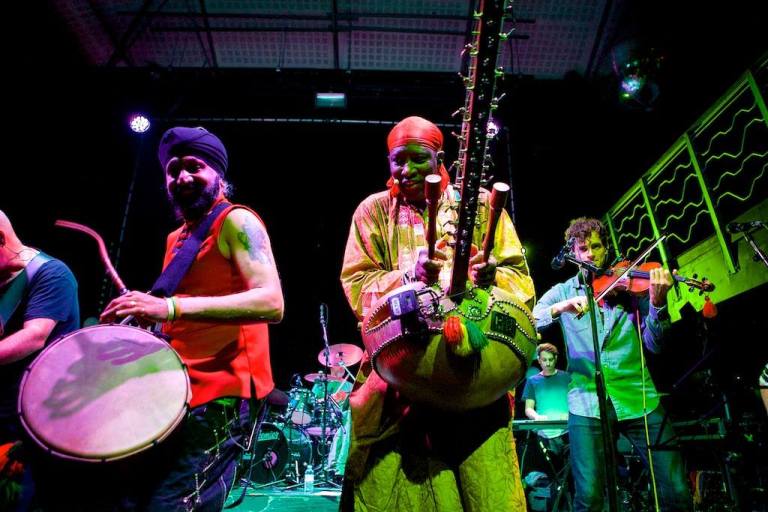 Part of the way through the first half, N’Faly Kouyaté, the kora player dressed in an orange African outfit explains what a kora is. Its a 21 stringed harp from west Africa. “Kora players are like a live library of story telling,” he says. There is a smoothness, lyrical quality to his playing, then of course, there is his majestic voice. He has sweet high notes. He sounds like he was born to do this.

In the second half, Jimmy Kalsi came out front with his glasses perched on top of his turban and his large Dhol drum strapped around him which he plays with a stick in each hand.

G-Croft has the modern swagger, N’Faly Kouyaté has the voice, but Kalsi has the stage patter honed from playing big festivals “move like this, wave your hands in the air, move on the off beat.” He has the instructions. Everybody is loving it.

The second half is the equivalent of turning the amps up to 11. Simon tells the crowd “We’re going to take you to the edge then push you off.”

Everybody in the band gets ample time to showcase their skills on songs like ‘Higher love’, ‘Desert billy’ and ‘Kalsi breakbeat’.

Afro Celt Sound System are type of band which you could see every night of the tour because every night would be different even if the set list stayed the same because they are such great improvisers. 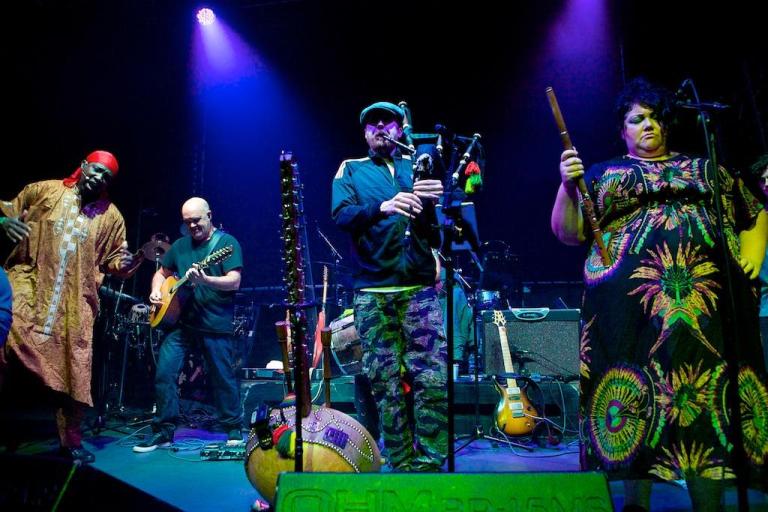 Before the encore N’Faly Kouyaté tells the audience about his charity bringing water to his home village and surrounding area. Money from the merchandise goes towards this.

The band lock arms and bow at the end. Simon Emmerson has loved every minute of it “I love gigs like this,” he proudly proclaims “I’m an old punk at heart. We’ve done all the posh gigs, formal ones with people sitting down. We will always do gigs like this.”

Afro Celt Sound system: Raw, authentic, uncompromising, they mess with your head if you didn’t know what to expect (Bagpipe solos!!!) Maybe he is a punk at heart after all.