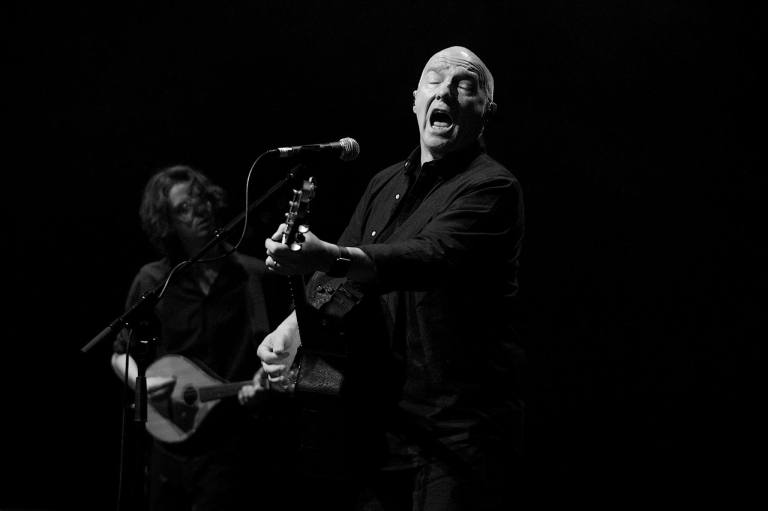 The first act on is India Electric co. Cole Stacey and Joseph O’Keefe are from Devon and have a brand of folk all of their own. The guitar melodies interlock with the violin and manage to convey a gamut of emotions – from soothing to danger. They do blues tinged tunes reminiscent of Tom Waits but with a voice that hasn’t suffered form acute bar-room excess. Singing songs about missing out on lost love but sounding young and fresh enough to go back for a second chance before its too late. The violin player is a virtuoso who reminds me of Stephane Grappelli. ‘Lost in Translation’ and ‘My Friends Are Rich’ should be hits.

After a brief break, its time for the main act.

Midge Ure is on tour and he’s come to Durham, ready to entertain with a greatest hits show with a difference. It’s stripped back. Midge on acoustic guitar flanked by India Electric Co. on mandolin and violin. The violin player on the right occasionally gets on the keyboards for some of the Ultravox numbers.

The sound at the Gala theatre is excellent. We can hear every note he sings and every note played. His voice is on top form. Midge is in a relaxed mood. He’s doing “something from everything”, covering from 1978 onwards. He’s been working out the format and set list as he’s been going along, now he reckons he’s nailed it. Reinterpretations of songs from 14 albums in one a half hours? No problem. 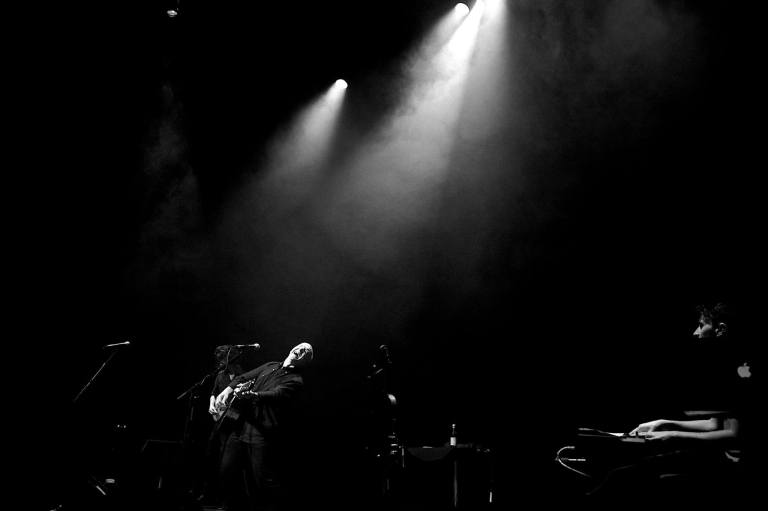 In between each song he chats with the audience, cracking jokes: commiserating that some are missing Strictly Come Dancing on tv, how heavy the rain is and that listening to the new stuff is “the price you’ve got to pay for listening to the old”. The newer stuff is just as good though such as ‘Starcrossed’, from one of his more recent solo albums, which he sings effortlessly. He leans back, turning his head to the right for the loudest notes, all with his unmissable Scottish accent. He is the one of the most distinctive singers of vowels in the business.

He teases us with a riff from Slick (one of his early bands) then a one from Thin Lizzy before telling us he’s not doing them tonight. He mentions that he only discovered that the violin player could play the piano half way through last year’s tour. “That would’ve been useful to know” he says with a smile.

He keeps knocking out the hits with his powerful voice. People don’t need asking twice to clap or sing along. Its an all-seater venue but people are getting up and dancing at the front.

“Back in 2010, hell really did freeze over and I got back together with Ultravox. It was great fun. We toured, we recorded an album.” He performs ‘One’ from the ‘Brilliant’ LP.

Would he do any Visage tracks?
“Oh the damned don’t cry” he sings. There is no gap when he goes into ‘Vienna’ (we all do the “Oh Vienna” bit).

He asks for help singing ‘Fade to Grey’. Then he finishes with ‘Hymn.’

Throughout the gig, Midge has been interspersing the songs with anecdotes (like writing the lyrics for Lament and Reap the Wild Wind in the Scottish highlands with Ultravox’s bass player). His encore: He starts by saying he’s been in America recently and the rise of Donald Trump scares him so he thought he’d end with a song written about politicians. ‘All Fall Down.’ 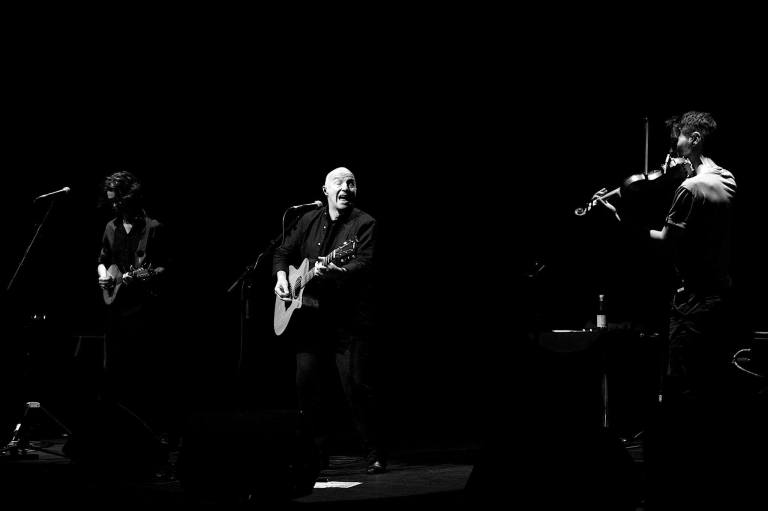 Midge singing and a knowledgeable crowd joining in. He’s been re-interpreting his back catalogue all night but with mandolin, acoustic guitar and violin, this one sounds as close to the recorded version (which featured the Chieftains) as we’re going to get. The perfect end to the set.

He was right. He nailed it. The crème of 14 albums in one night. Job done.

Most popular tune of the night? ‘Lament’. I could here people talking about it as they gathered round the stall to buy CDs and vinyl. Personally, I think ‘Reap the Wild Wind’ did it for me – I’ve still got the tune in my head, then there’s the old Visage song ‘The Damned Don’t Cry’ and then …. the list goes on and on.

Midge Ure: such a great catalogue of tunes. I want to see him again soon, in a bigger venue with more room to dance.