It is 7.45pm and we are ready for reggae royalty. The crowd is a mixture of young and old, some already dancing to the dub coming out of the speakers.

The band come out first. The drummer, rhythm guitarist and bass player look old enough to be everybody’s grandfathers.

It starts with two songs from Leba, who is Toots’ daughter. She sounds like Gladys Knight except she has reggae in her bones. She does two songs about peace and love before she is gone to join the other two female backing vocalists.

Now it was time for the main event. The dreadlocked guitarist stepped up to the mic to make the introduction, filling in the gaps in knowledge for those too young not to know the history of the vocal legend about to come to the stage. “The term reggae music comes from one of his songs, he is a Grammy winner, he’s probably had more number ones than any other Jamaican artist.”

Toots walks out. He moves slow. The cheers go up. He is wearing white shoes, a shiny leather sleeveless jumpsuit with a bandana and a small gold cross. He waves, the cheers go up again. He puts on his shades. The cheers get louder. I have never been to a gig where somebody gets a such a reception for just putting their sunglasses on. Maybe the crowd know it’s a signal that things are going to get serious, serious fantastic music.

And then he sings.

‘Pressure drop.’ The voice – undiminished by age. It sounds exactly the same as on the old Ska records from the 1960s, exactly the same as when I saw him in 1985. Powerful, loud, deep and rasping. So powerful that he hardly ever brings the microphone directly to his mouth, he holds it somewhere near his belly button.

The band is super super tight. Reggae at its heart is simple music. It is all about the feel. a change in milliseconds in the interaction between the musicians can make the difference between a rhythm sounding flat or god-like genius. The band know what they are doing. They are James Brown type tight and expertly choreographed. They speed up and slow down to his whims.

When listening to the music, I hear touches of early Bob Marley and the Wailers, I hear the essence of the 2 Tone bands in the tunes ‘Funky Kingston’, ‘Last train to Skaville’, ‘Louie Louie’

The crowd know all the words to ‘Monkey Man’ (which had been covered by The Specials at their peak). 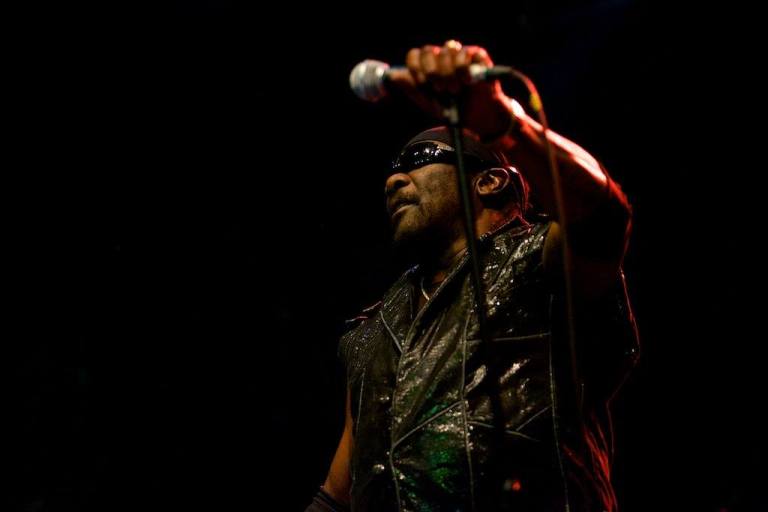 I have to mention Toots dancing. One fan came up to me and insisted I write about it – so here it goes. He can’t dance, not in the conventional sense. He shuffles, he flicks his arms out. He has moves that James Brown and Michael Jackson would reject wholeheartedly. One time he looked like he was trying to do hopscotch combined with the robot. Its endearing, its entertaining, it fits in with what he does. Playing life-affirming music.

He and the band left the stage after Monkey Man and the crowd kept on singing it for five minutes then the band returned and carried on with the song.

It ends with a smile, a wave. He fist bumps the entire band then he is gone, promising to return next year.